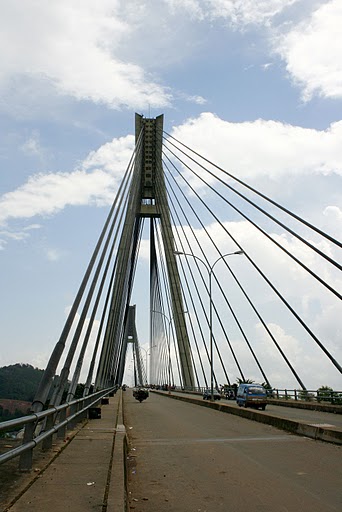 The first time I visited Batam was on August 2008. Back then, I only have not more than 2 days to explore Batam before continuing my trip to Singapore. At that time, I went to visit Pulau Galang. To reach Pulau Galang, you have to pass the famous bridge called “Jembatan Barelang” or local people called it as “Jembatan Habibie”..it’s because Pak Habibie who had initiative to build this bridge which connect 6 islands (Pulau Batam, Pulau Tonton, Pulau Nipah, Pulau Rempang, Pulau Galang, and Pulau Galang Baru). This bridge also represent how “Otorita Batam” rules Batam or it can be called as one of their success stories. What is Otorita Batam?

(Source: Wikipedia) In ’70, Indonesia’s government had initiative to transform Batam from forested area to industrial area since its benefits being close to Singapore. To supervise the development process, Badan Otorita Batam (BOB) founded in 1973. In 1999, Kotamadya Batam changed to Daerah Otonomi (Pemerintah Kota) which still include BOB in rules the government and economy development. Signed in June 2006, Batam (together with Bintan and Karimun) are part of Special Economic Zone with Singapore, which eliminates tariffs and value added taxes for goods shipped between Batam and Singapore. In 2007, Indonesia’s Government decided to change BOB with Dewan Kawasan Zona Perdagangan Bebas Batam, Bintan dan Karimun (DK FTZ BBK) dan Badan Pengusahaan Kawasan (BPK). So, the BOB was no longer exist ever since.

This post is not about political issue related to BOB, DK FTZ BBK, or BPK. I just want to share Batam in 2011 and what most local people said about their beloved Batam. I had a longer opportunity to explore Batam last week when I have to attend training in this city. A week in Batam and I have a nickname for Batam: A city with thousands “RUKO”. Yes, you can find thousands of it in every inch of that city. Does business rules this city? Unfortunately most of those buildings are empty! (local people said there is a regulation for a land owner to build something otherwise they should sell their land). I can see why they have that kind of regulation, maybe to stimulate the economy development in Batam. It is also happened with Malls. You may find 8 Malls in this city and is it full of crowded? Only 1 – 2 malls 😦 . Local people said they were “happier and wealthier” when BOB rules Batam. Everything has brighter future and good investment prospect.  Is it true? only local people who can answer this question. Houses, Ruko, Malls were having never-ending building period at that time. What about now? What happened to Batam recently? Only government could answer this question.

But one thing for sure, if Indonesia’s government does not see this condition, the master plan to make Batam as Indonesia’s Singapore will be just “in memoriam”.

– Rakyat Indonesia who dreams about freedom, peace, and wealthy in her beloved country-

Born as Amelia Saputri who simply loves travelling and photography